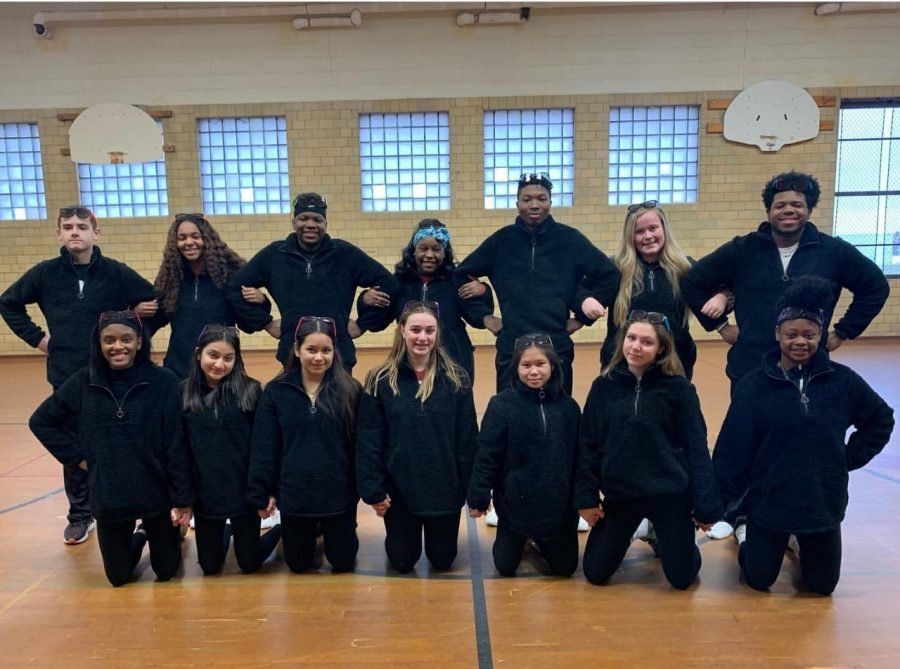 Rockford East’s competition cheer squad posing before their first competition of the year. Photo taken from @rockfordeastcheer via Instagram.

Saturday Jan. 4th, East High School’s competition cheerleaders had their first competition of the 2019-2020 season. Coming back from a not-so-great season, girls and guys alike are confident that this year is going to be better.
The team stepped onto the mat around 3:30 according to the team’s social media posts, and they took fourth place out of five teams. With many key returners, the team was excited to compete and ecstatic to be together again.
“[It’s] very exciting [be]cause we have never had a routine like this before and are hitting all our skills that we need to hit.” said Alexi Zavadil, class of 2020.
Zavadil has been on the team since her freshman year, and has been there through all of their ups and downs, but stays proud of the team and how far they have come.
Head coach Michelle Swick is also very proud of the group and how they performed at their competition.
“I think the team did really well at their first comp. They wet out there and really performed their best, which is all we can ask of them,” said Swick.
Swick is one of three coaches, followed by Paige Mattoon and Jasmine Shoulders. Teammates say that they are all important to the team’s overall accomplishments.
After this past competition, the team is ready for the rest of the season. They are setting high goals and are hoping for some great things this season.
“I think future comps are just going to get better and better. We are really working on the small things in our routine and hoping to finish top five in the conference,” Swick said.
As exciting as it is to see the season pass by, it holds to be the last year for some of the team before graduation.
Alondra Covarrubias is a key returner this year, and is also celebrating her final season with the team. She has been with the team for four strong years, and has grown with them since she was a freshman.
When asked about how it feels being one of the people to cheer with the school all four years Covarrubias shared, “If you think about it, it makes you feel old in a way because freshman year I was a little kid, and now I’m here and ready to graduate.”
However Covarrubias is not just focused on leaving, but also remembers the good times they had.
“It has been a more positive vibe than it has been in other years. It’s our senior year, and we are just trying to enjoy it.”