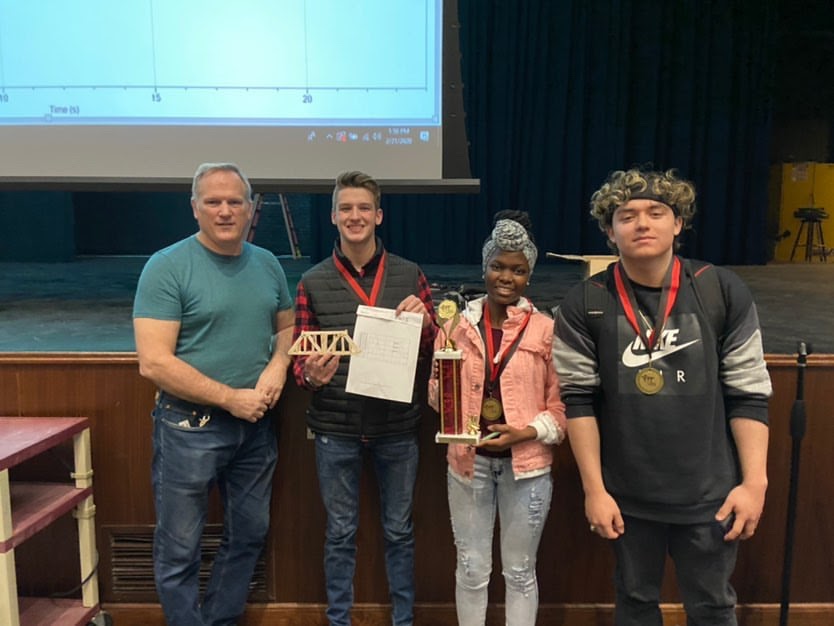 Bruce Kramer, Michael Mandujano, Delisia Eiland, and Alex Miramontes shown in the picture. The bridge built withstood over 200 Newtons of pressure. "We should have placed way higher, I did not think the other teams would do as well as everyone did." said Corey Young, class of 2020.

The annual Bridge Building competition was held on Friday, Feb. 21, 2020. Michael Mandujano, Alex Miramontes, Luis Melo and Delisia Eiland came in first out of 72 teams. Teams throughout the competition were a variety of students from schools such as Auburn, Guilford, Jefferson and Roosevelt, alongside East.

The competition was to build a truss (small bridge) as strong as possible to try and withstand a couple hundred newtons of weight. Once a piece of the wood snapped, a program told live data up on the ”big stage” (projector screen). Teams were given sticks, glue and box cutters.

East had a couple of extra teams this year. A few math teachers strongly encouraged students to enter the competition. Compared to last year, where East only entered in Principles of Engineering classes and Construction year two classes, it showed a jump in numbers. It ended up paying off in the end because many of the top spots were East teams.

“We placed in third until the final team of the day. The final team shot up quickly and knocked us down to fourth place,” said Corey Young, class of 2020. This is his second year of competing.

East is no stranger to the spotlight for events district-wide, especially in engineering. In spring of 2018, East came in first for the annual boat racing competition. While in late winter of 2019, East topped the battle bots event. in last year’s bridge building competition, East came in a close second place, behind a team from Guilford.

The construction and engineering classes look forward to next year in hopes of topping once again.